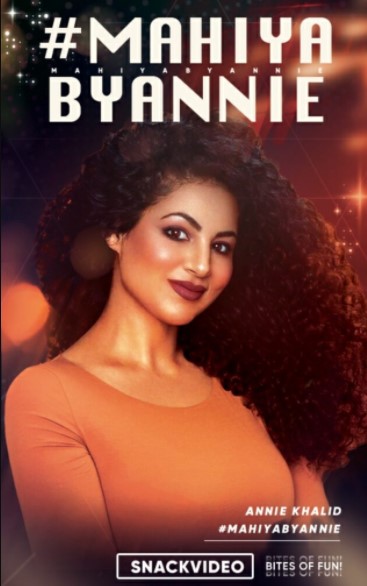 More and more musicians are settling in SnackVideo these days, releasing and promoting their groovy music with thousands of users on the platform. Last week, the ‘Mahiya’ Queen, Annie Khalid, made an exclusive debut of her signature song on SnackVideo and kicked off #MahiyabyAnnie Challenge.

So far, there has been around 77k participants in the challenge. Related hashtag

#SnackMusician has become trending on Twitter in Pakistan, gaining over 1.5k posts and

As an English-Pakistani singer and model, Annie Khalid rose to fame in Pakistan in 2005 when her first single ‘Mahiya’ took the nation by storm. The song became popular due to its catchy tune and simple lyrics, and it was later used in the Indian film Awarapan (2007).

According to Annie, it is the unexpected success of ‘Mahiya’ that allowed her to consider making singing her life career as well as moving back to Pakistan. Since then, the talented singer has done it all from Bollywood item songs to collaborations with big names and her own hit albums, rocking the music world with her impressive fashion and soulful voice.

Till now, the song ‘Mahiya’ still remains a fan favorite, and it got onboard only on SnackVideo. The #MahiyabyAnnie challenge on SnackVideo is breathing new life into the most-played hit song back in the days. Within the hashtag, people can either cover the song itself or create transition videos, dance moves, or duet videos to join the challenge and “shine just like a star.”

Khuda Aur Mohabbat trending at no.1 in India on YouTube

Muqaddar in Review: All of Farkhanda’s plans against Raima have fallen...

Aijaz Aslam Ventures into the world of Skincare with a Personal...

Meesha’s lawyer to cross-examine the witnesses of Ali Zafar on 29...

Up, close and personal with Dr Sheeza Mohsin